Whether you’re familiar with Israel or not, if tech is of any interest to you must have heard it at least a couple of times: Israel is the Start-up Nation. I spent a couple of months in Tel Aviv trying to get a sense of the meaning of this sentence. Israelis are throwing it all over the place to market their country but it’s more than just a tagline. It’s a reality. Israel is not only a start-up nation but a nation of start-ups.

Here are some amazing facts about Israel’s Ecosystem:

So the question remains: HOW IS IT POSSIBLE? WHAT MAKES ISRAEL A LEADING INNOVATION VOLCANO?

The entirety of Saul Singer’s Startup Nation book is dedicated to this question but who’s got time for books nowadays? I’ve thought that doing it the Israeli way was far more valuable. So, here’s a pragmatic one pager infographic picture we came up with at Oneragtime: 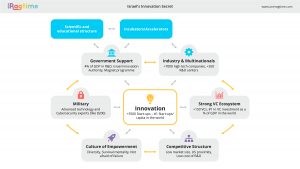 The pillar of innovations

In Israel, military service is mandatory from 18 to 21 years old. There are multiple intelligence units that create tech experts, cyber experts and hackers like nowhere else. For instance, 8200 is the supreme IDF intelligence information unit and 81 focuses on supplying the newest technology to Israeli combat soldiers. The culture and educational methodology there is exceptional:

“There’s nobody around to tell you how to do it. “The culture inside–and it’s by design–is that your superiors just tell you to go figure it out. That gives you the huge freedom to think differently. It’s you or nobody else. And when you’re an entrepreneur, that’s the most important skill. When you do 5 or 10 or 20 of those projects, you’ve just built 3 things that could be a start-up.” Avishai Abrahami, Founder of Wix.

When we assume that most of the technological innovation that we know today such as GPS or the internet are coming out of the US army, we can imagine how Israel’s military contributes to the Innovation Secret. More than 1,000 companies have been founded by 8200 alumni, from Waze to Check Point to Mirabilis, the parent company of ICQ.. and 90% of the intelligence material in Israel comes from 8200 according to Forbes.

In Israel, the Government dedicates a huge part of its budget to the military and to R&D in technology (20% and 4% respectively of GDP). The map below produced by The Samuel Neaman Institute clearly shows how the government and public corporations contribute to the emergence of all types of innovation clusters. 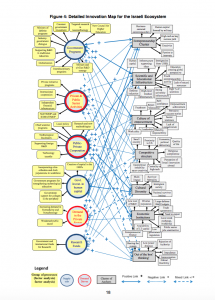 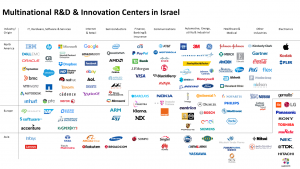 “There are roughly 350 multinational R&D centres in Israel, many of which were established following the acquisition of Israeli hi-tech companies. The R&D centres constitute an important part of the Israeli innovation ecosystem and create significant technological value – they represent about 50% of investments in R&D. In addition, these R&D centres positively affect the economy from the perspective of salaries and productivity. Furthermore, alumni of the R&D centres often move among different players in the hi-tech industry over the course of their careers, thus distributing the technological and managerial skills they have acquired, a phenomenon known professionally as “spillover” according to 2017 Israel Innovation Authority Report.

There are roughly 150 active VCs in Israel. Some of them are known for their sector expertise like cybersecurity, lifesciences or manufacturing… others for their huge track record (Magma, Pitango, Gemini, Canaan, JVP..). Either way, the funding ecosystem is impressive and there’s no need to explain how it contributes to the ecosystem, the data speaks for itself: 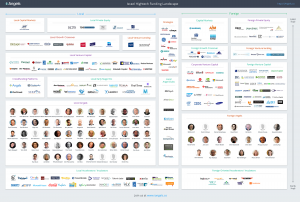 Israel has 8.5 million people, of which around 480,000 live in Tel Aviv. When you consider only half of those people to be consumers, and fewer still to have access to free capital, one thing is clear: you can’t count on launching your product or service locally with any real measure of success. It means that thinking big, thinking global, is the only choice. Having no market is better than having a small one. To survive, you’ll have to go big. That’s it.

Having said that, Israel has incredible metrics relative to its structure. For instance, Israel doubled its population in 30 years (from 4.1 million to 8.2 million), increased its GDP by 400%, foreign currency reserves by 3%, while at the same time reducing government debt by 76%. Security expenditure as a percentage of product also fell by 75%, government deficit by 82%, the tax burden by 30%, and American aid (as a percentage of product) by 90%. The jump in Israeli Gross National Product since the beginning of the century has been nothing less than astounding—from 500 billion shekels to more than one trillion. Israel owes this impressive growth at least in part to the achievements of the technology industry which saw a long line of successful exits and invited a stream of foreign investments according to the Israel National Technological Innovation Report of 2016 by Luzzatto Group.

For this part I’ll let you read this great article by Startup Nation Central about why israeli entrepreneurs feel so empowered and are so unique.

Israel has great components to be a world class leader in innovation. But what makes it even better is the fact that all of those components are connected to one another. Thats why 1+1=3.