First stop of our Start-up Hunt, the Pirate Summit was probably the most eccentric event we will attend during our tour.

The organisers decided to host the event in Cologne, Germany’s fourth biggest city, to explore a start-up ecosystem beyond the “normal hotspots”. Nevertheless, leading multinationals such as Google, KPMG and Canon were partners of the Pirate Summit. Google itself was even actively scouting for start-ups to register for its Marketing Solutions and buy its products. 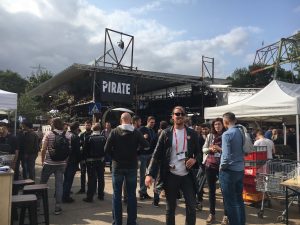 Immediately, one is immersed in this convivial atmosphere where speakers punctuate and end their talks with “AAARRRRR”, dress up as pirates, and talk very freely to one another. What better way to meet people?

During our 2 days there, we discovered many start-ups that we’ll introduce later, met actors of the European start-up ecosystem, VCs, family offices, media players etc.

Pirate Summit participants came from all over Europe, many from Germany. It was however quite clear that the 3 main cities people came from were London, Paris and Berlin. In a talk entitled “The European Hub fight: London vs. Paris vs. Berlin” the speakers explained why they settled in one of those 3 cities and discussed the policies that had been implemented by governments to attract entrepreneurs and investments. The United Kingdom, for example, has passed legislation to fast-track access to visas, enabling both entrepreneurs and investors to settle in the UK easily. France has also implemented similar strategies with the Paris French Tech ticket for example, a programme developed to attract foreign entrepreneurs in Paris.

In addition to networking sessions and talks, the Pirate Summit hosted a pitch competition, which was a great way for us to discover start-ups. From Stockholm to Baku, 80 start-ups had been selected to participate in the “Walk-the-Plank” competition for a chance to travel to London and San Francisco to meet with the best investors in town.

Here are a few that caught our attention:

– 0m7sense which provides Hardware and Software solutions for the energy management of datacenters. The team’s sharp vision of the market and its problematics truly caught our attention.

– Although Alpha Solutions does not fit our investment thesis, we loved the company’s expertise and drive to save the world with cleaning bio-gas and liquids.

– The Newsroom which provides news publishers with a platform to drastically improve their mobile content display. We were impressed by their metrics and the team’s strength and vision.

Most start-ups at Pirate Summit were B2B, but no specific trend arose although food, entertainment, fashion and knowledge management were widely represented. 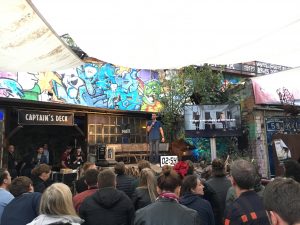 The evenings were also an integral part of the summit. On our first night in Cologne, we attended a networking event in the hidden garden of a house in South Cologne. A good first step into the networking game.

Then, on the first night of the summit, The Burn took place. A giant wooden statue was lighted on fire while Manuel, Pirate Summit founder, invited entrepreneurs to burn their fears and always take the leap of faith. 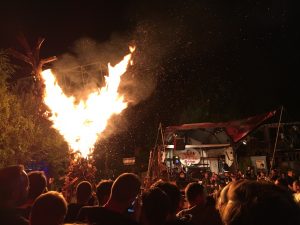 This philosophy resonates with us as the first criteria we look at before investing is the founding team. We look for extraordinary leaders with grit.

On the third and last night, only a few survivors – including us – were still on their feet. A smaller group, it was easier to have deeper conversations and create meaningful connections. 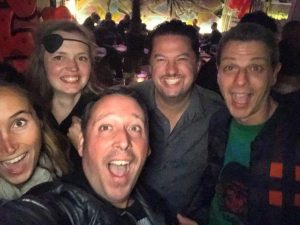 All in all, Cologne was a productive first Start-up Hunt stop. Lots of connections were made to prepare our visit to Berlin and, hopefully, some start-ups we met will make their way onto the OneRagtime platform.

A sneak peak of the unique speakers here at @piratesummit #startuphunt2017