Some might say we were a little bit excited for this stop on our Start-up Hunt. Our destination was the Bavarian capital of Munich and the hugely successful Bits & Pretzels, a three-day conference for founders and other ecosystem movers and shakers. A friendly environment of 5000 attendees keen to listen, learn and network. And did we mention it coincided with Oktoberfest, the world’s largest beer festival? No wonder the OneRagteam was looking forward to this one.

While the event had a very German focus and audience, there was no dearth of talent, innovation or inspiration. We expect this German-centric emphasis is something organisers were trying to address, as they announced that Kevin Spacey is joining as a 4th partner for next year’s conference. Will a big American name bring in a more international crowd? We think so, and we expect to see more Silicon Valley VCs and start-ups descending on Germany’s third biggest city for next year’s conference. We even heard on the grapevine that Spacey’s managed to pin down Will Smith as a speaker next year – if the pull of beer, sausages, and a very active ecosystem wasn’t enough already. 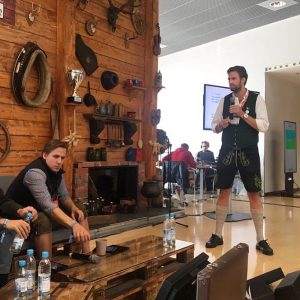 Although Berlin is currently the best European city to launch a start-up according to the European Start-up Initiative, in theory Munich, Germany’s economic heartland, has all the ingredients to challenge its big brother. The home to global corporations such as BMW, Allianz and Siemens, Munich has the highest purchasing power of any German city, and a strong research background through universities like the Technische Universität München and the Ludwig-Maximilians Universität. The city only accounts for 11% of Germany’s start-ups, but what’s lacking in the volume of start-ups, is made up for in the quality. Hoping to join the ranks of Bragi, the headphone (or “ear computer”) creators who once ran the largest Kickstarter in European history, and Metaio, the AR specialists purchased by Apple in 2015 are start-ups like Wywy, whose platform allows TV advertisers to analyse their online impact, and the AI player Neokami.

Corporates are getting in on the act too, such as the BMW Startup Garage, the Venture Client unity of the BMW Group. BMW Startup Garage becomes an early-stage client of the start-up, creating a “no-strings-attached partnership” to integrate and validate a start-up’s product, service or technology in BMW Group vehicles. This, in addition to IBM’s creation of its 1000 strong “innovation centre” Watson IOT Global Headquarters, its largest European investment in over 20 years, shows the confidence of major corporations in the Munich start-up scene.

Support can also be found by the likes of TechFounders, who provide a 20-week international accelerator programme (and take zero equity), BayStartUP, a Bavarian network for all kinds of investors interested in early-stage start-ups, and Gründer-Regio M; an umbrella organisation for (ready for this) universities, research institutions, business associations and consultants, venture capital and finance organisations, incubators and technology centres, the Chamber of Commerce and the City of Munich. Phew.

But feedback still shows evidence of a substantial financing gap, a lack of seed funding and a lack of growth funding (Series B and C fundraisings over $10 million). Some blame the shortage of German venture funds focusing on later stage deals, while the dominance of the German language fails to attract international start-ups who snoozed through their high-school German classes. Nevertheless, with the depth of talent, increasing corporate input and events like Bits & Pretzels, we’re excited to see what Munich’s ecosystem will birth next.