Estonia: 1.3m inhabitants, 450 start-ups. In other words, one of the highest rates worldwide of start-ups per capita. After 36 hours in Tallinn, Estonia’s capital, we were curious to understand why such a small country sandwiched between Latvia, Russia and the Baltic Sea was a booming start-up hub.

A quick dip into the history books…

To find out why, we need to head back to the early 1990s… (we promise this history lesson will be quick!) when Soviet leader Mikhail Gorbachev’s glasnost and perestroiska policy reforms – literally meaning “transparency and restructuring” – led to the demise of the Soviet Union. These policies had numerous effects including political liberalisation, the rise of nationalism and the fracturing of the Communist Party, once absolute and almighty. But the Soviet Government’s attempts to restructure the USSR according to the new political spectrum failed. By 6th September 1991, the State Council officially recognised the independence of Estonia, Latvia and Lithuania. The rest of the Republics then followed.

Estonia’s new leaders were both young and visionary, turning the legacy of the Soviet Union into a competitive edge. They saw this as an opportunity to build a new country, and thus, the first “country-as-a-start-up” was born. They went from having no land registry, to a purely digital one. From having no telecom infrastructure (declining to adopt Finland’s archaic, analogue telephone-exchange system), to building their own, digital model. Estonia essentially skipped the adoption of the late 20th century’s lumbersome administration tools, including legacy technologies.

Twenty years after the collapse of the USSR, while certain neighbouring countries are still in the midst of their technological development, high-tech companies account for 15% of Estonia’s GDP. They also boast one of the world’s fastest broadband speeds, schools are equipped with computers and high-speed internet nationwide, and the first online voting took place in 2005. Legend says you can walk 100 miles, from Tallinn to Tartu (Estonia’s second largest city), without ever losing a high-speed internet connection. Companies like TransferWise, Taxify, Pipedrive and Skype were born or built their products in Estonia. Pipedrive, the sales management tool, have just welcomed our awesome mentor Laurence Bret-Stern to their team as their new CMO, if you needed any more evidence of Estonia’s ability to attract the finest talents! Estonia is drawing in the brightest and best, and creating products that lead by example.

Skype’s success story encapsulates how a unicorn will come to life when the right start-up infrastructure is there to nurture it. Even though Skype’s two main co-founders were Swedish and Danish, the adventure started in Tallinn and the development team was Estonian. The product was invented and built in Estonia. Their $2.6bn exit to eBay was the first Estonian success story and had two main impacts: it created a new class of Estonian investors pouring money in early-stage start-ups, and motivated a fledgling generation of entrepreneurs.

Since Skype, several successful companies were born in Tallinn. TransferWise, the P2P money transfer service, is headquartered in London but was founded and designed by an Estonian team and has its main office in Tallinn. onoff, one of our fantastic portfolio companies, have built their amazing development team in Estonia, too.

And why would a start-up relocate to Tallinn to build their product teams, where average temperature lingers at a bitter -2°C and where the sun goes down at 3pm in December? The talent! Estonia has a large pool of tech talents coming mainly from Tallinn and Tartü. They also managed to attract high-skilled developers and software engineers from neighbouring countries, notably Ukraine, Russia, Latvia and Belarus. Estonian start-ups are amazing at building products; however, we believe they have room to improve on their sales and marketing. Building a great product is cool, but having the capacity to sell worldwide is paramount.

We believe that foreign investors coming to Estonia, like OneRagtime, have a role to play. By bringing not only money but also operational support, access to European corporates and to wider consumer markets. We genuinely heard “if an Estonian start-up is built for the Estonian market, then it is not a start-up” on the streets of Tallinn. The benefit of having a population of only 1.3 million is that all start-ups have an international-outlook in their DNA, and are built to scale worldwide from the get-go. Government initiatives like Startup Estonia are supporting homegrown talent, with backing from collectives like the Estonian Business Angels Network, which now counts more than 100 members, while their successful e-Residency initiative is drawing global attention and foreign tax revenues. This combination is propelling start-ups, and Estonia as a nation, to success.

The mix of visionary government, Skype’s success story and ample access to talent has created a buoyant ecosystem. We had the chance to meet several incubators, accelerators, catalysers and co-working spaces including Start-up Wise Guys, Lift99, Start-up Estonia, Vunk or Digix. As well as great start-ups obviously: onoff, Wolf3D and Rangeforce, to name a few.

So all in all, for us, Tallinn means great products, deep tech, international and scalable companies, and a welcoming ecosystem. Tallinn, we’ll be back for sure!

PS: Insider tips (because we love you) make sure you’re wearing your best socks (no holes, please) before going to a meeting in Tallinn, you will almost certainly have to take off your shoes to put on a pair of beautiful slippers, just like these. 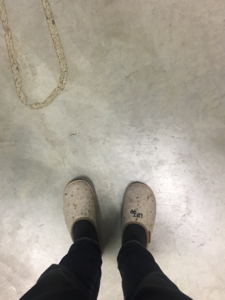